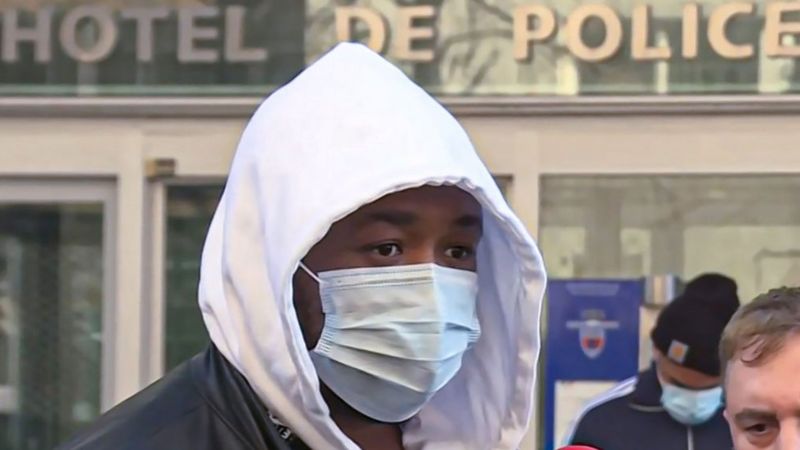 French authorities have suspended three police officers after they were seen on video beating up a black music producer in central Paris. The incident on Saturday has prompted a fresh outcry over the conduct of French security forces. On Monday police were accused of using unnecessary force as they dismantled a makeshift migrant camp in Paris. The incidents come as the government tries to bring in laws banning the broadcast of police officers' faces.
Critics of the legislation say that without such images, none of the incidents which took place over the past week would have come to light. Tough French immigration bill approved
On Thursday, French football star Kylian Mbappe, who is black, joined national teammates and fellow athletes in condemning the latest incident.
"Unbearable video, unacceptable violence. Say no to racism," he wrote on Twitter next to a picture of the bloodied face of the injured producer, who has been named only as Michel.
The security camera video was published on Thursday by the online news site Loopsider. It shows three officers kicking, punching and using their truncheons on the man after he entered his studio. Loopsider said he had initially been stopped for not wearing a mask.
Michel said that he was also subjected to racist abuse during the five minute beating. He was detained and charged with violence and resisting arrest, but prosecutors threw the charges out and instead opened an investigation against the officers.
As he arrived at police headquarters on Thursday with his lawyer to file a complaint, Michel told reporters: "People who should have been protecting me attacked me. I did nothing to deserve this. I just want these three people to be punished according to the law." Paris Mayor Anne Hidalgo said she was "profoundly shocked" by the "intolerable act". Interior Minister Gérald Darmanin told French television that he would press for the officers' dismissal, saying they had "soiled the uniform of the republic".
Earlier this week Mr Darmanin ordered police to provide a full report after they violently dismantled a makeshift migrant camp in the capital, clashing with migrants and activists.
He tweeted that some of the scenes were "shocking".
Meanwhile, the French government is pressing ahead with its controversial security bill, which opponents say could undermine the media's ability to scrutinise police behaviour.
Article 24 of the bill makes it a criminal offence to post images of police or soldiers on social media which are deemed to target them as individuals.
No new 'Jungle' camp in Calais - Macron
How the migrant crisis changed Europe
The government argues that the new bill does not jeopardise the rights of the media and ordinary citizens to report police abuses.
But in the face of criticism the government added an amendment, specifying that Article 24 "will only target the dissemination of images clearly aimed at harming a police officer's or soldier's physical or psychological integrity".
People found guilty could be punished by a year in prison or a fine of up to €45,000 (£40,000).
Top
Post Reply
1 post • Page 1 of 1